If you ask just about anyone to name off Nintendo’s characters, the first 3 names they’re probably going to say (unless they just name a bunch of Mario characters) are Mario, Link, and Samus. The Metroid series might not be quite as popular as its sister franchise, Zelda, or as easily recognizable as the household name of Mario but to its fans, Metroid is just as iconic. During the era of the Nintendo 64, many of these icons made their way into the third dimension. Super Mario 64 revolutionized the way we play games as a whole, and The Legend of Zelda: Ocarina of Time laid the groundwork for almost every adventure game since. Even the newly introduced Pokemon got the 3D treatment…but where was Samus? Aside from being a contender in Super Smash Bros. , the stoic bounty hunter was nowhere to be seen. It wasn’t until Nintendo’s Space World conference in 2000 (yes, the same one with the infamous Zelda tech demo) that we got to see Samus in 3D, and it was in a first person view. Needless to say, this caused an uproar. Turning an adventure game into a first person shooter? How dare they soil the name of Metroid! Did I mention it was being developed by some company no one had ever heard of in Texas? Of course, everyone was simply speaking out of ignorance and out of heartfelt concern for their beloved franchise. Oh, how wrong we were. 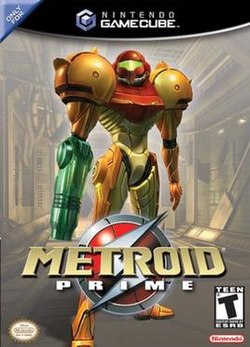 I’d like to start by telling you my personal experiences with Metroid Prime. I had just gotten my GameCube a month prior, and my only games were Super Smash Bros. Melee and Animal Crossing. While both of those titles are 2 of my favorites to this day, I was itching for something new. I stopped by the local Movie Gallery (east coast subsidiary of Hollywood Video) and Metroid Prime caught my eye. I’d never actually played a Metroid game. I’d watched my friend play through Super Metroid and an acquaintance of mine who was handy with a pencil drew me a pretty detailed sketch of Samus in 6th grade, but that was about it. I had of course heard about Prime and how it was THE GameCube game, aside from Melee. When I got my GameCube, I already had a Playstation 2 and my TV only had 1 set of inputs. rather than swapping inputs all the time, I had the GameCube hooked up to a small CRT in one of our storage rooms. Because my family generally went to bed early and sound traveled out of that room much more easily than my own, I’d use a headset to play at night. Somehow, headphones combined with the in-helmet HUD display really sucked me into the game, and I can never forget that immersion.

Metroid Prime, despite being in first person and utilizing a gun is not a first person shooter. It is a first person adventure. This game is very true to its roots and is as much about exploration, experimentation and of course atmosphere as a Metroid game should be. The graphical presentation is illustrious and each environment really does feel threatening and alien. That isn’t to say the graphics hold up perfectly today, as many of the textures have certainly aged, but the overall atmosphere has not been damaged. Retro Studios paid attention to the smallest details. I already mentioned how the game takes advantage of the first person viewpoint by putting you inside of Samus’ helmet, but they went much farther than that. If you walk through steam, the visor will fog, or if you kill an enemy too close for comfort, its gooey, neon innards will splatter and obscure your vision temporarily. There are 4 different beam types in the game for Samus’ arm canon, and each of them have various visual effects on the actual canon itself. For example, when firing a charged ice beam, the canon ices over externally for a few seconds. All of these things are of course purely aesthetic but they pull you into the experience that much more. 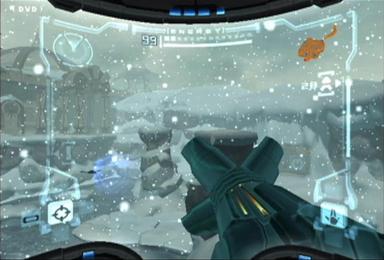 The control scheme, in spite of going against modern FPS standards, is perfectly suited to the game. Instead of the standard 2 stick setup where the left stick controls movement and the right stick controls your view, you both move and turn with a single stick while the other is used to switch visors, which are used for different puzzles. In order to freely look, you have to hold the right shoulder button. This sounds like a mess, but it just works. There is also a lock-on feature that functions very much like Z-targeting in Ocarina of Time. Not only does it take cues from that game in its combat, but it also holds a similar reputation on its console as the quintessential adventure game. Like Ocarina of Time, Metroid Prime is consistently featured on “best of ” lists and often even given the #1 spot.

I am about to go through the game in detail, so if you have somehow managed to avoid this game for the past 14 years, and would like to remain free of spoilers, I would suggest you rapidly scroll until you see the text indicting you to stop.

The game starts with Samus arriving at a large vessel called the Frigate Orpheon, following a distress signal. Shortly after infiltrating the vessel she discovers that it belongs to her greatest enemies, space pirates; in particular a research and development team that have been genetically modifying creatures in an attempt to create bioweapons. Unfortunately, the scientists experiments have turned the tables. All of the pirates Samus encounters within the vessel are either already dead or on their last breath. Samus soon does battle with a giant parasite queen, but upon its defeat the creature falls into one of the ships reactor cores causing a self destruct sequence (of course). On her way out, Samus bumps into her old pal Ridley. Turns out he survived his defeat on Zebes, although Samus clearly did a number of him. A good portion of his body, including his wings, are now mechanical. He of course flees the scene for the planet Talon IV. Samus gives chase in her ship to see what’s going on. Upon arrival, samus explores some ruins of Chozo, the people who raised her. This environment is iconic to me ebcause it’s one of the first big environments you see in the game. In these ruins, Samus discovers that the planet’s water supply is highly toxic. The next two areas of the game are significantly smaller in comparison to the Chozo ruins, and that makes me sad because both of them are so rich and I would have loved to explore them more. In the Magmoor Caverns, Samus discovers that the pirates are harnessing geothermal energy from the planets core for some reason. This is of course the quintessential fire level, followed by none other than the quintessential ice level, Phendrana Drifts. the drifts are my favorite area in the entire game. Something about them is just calming. I love the relaxed music and even the enemies are a stark contrast to the rest of the game. While most of the creatures on Talon IV are naturally hostile, a lot of the enemies in Phendrana Drifts are just kind of peacefully existing until you disturb them. It’s through the drifts that Samus infiltrates the pirates’ research facility and finds that not only have they been experimented on their own kind, but also the dreaded Metroid parasites she’d fought so hard to eliminate. She also learns that the experiments are being conducted with a highly dangerous chemical known as Phazon. Having explored most of the planet and regained the majority of the abilities and items she lost while trying to escape the Orpheon, Samus re-explores the Chozo ruins, finding the wreckage of the Orpheon. This is where the game starts to get tough, throwing tons of resistance at you from not only the space pirates, but also the ghosts of the Chozo, driven mad by Phazon and unaware that Samus is their friend. After making her way through the vessel, she enters the Phazon mines. After doing some damage to Talon IV’s Metroid population, she encounters the Omega Pirate, a space pirate who has been severely corrupted by Phazon. Upon defeat, the abnormally large space pirate collapses on Samus and melts into Phazon, which her power armor absorbs. Rather than killing her, this creates a new type of armor that allows her to utilize Phazon as a weapon. At this point, Samus begins a tedious fetch quest for the Chozo artifacts because Ridley destroyed and scattered the pieces, of course. After a fight with Ridley, Samus descends into the Impact Crater, formed when a meteor contaminated with the very Phazon corrupting the planet made contact. This area is not only contaminated with a red phazon that her suit cannot protect her from, but many mutated life forms, including the infamous metroids. The music in this environment disturbed me as a kid, because it isn’t really music at all; it’s more akin to an alien static of sorts. Eventually Samus finds Metroid Prime, which barely resembles a Metroid at all. It looks more like a giant spider or crab. After doing some damage to it, however, this is revealed to only be an external shell. The real Metroid Prime is a much more evanescent floating creature. the very phazon that created it is ultimately its downfall as Samus overcharges her suit with a puddle of Phazon. In a last ditch effort, Metroid Pime steals the Phazon suit from Samus. Metroid Prime then turns itself into a living biological bomb, releasing all of the phazon contained in its body in a single explosion. Samus escapes to the surface. She removes her helmet as her ship lifts off, looking down on Talon IV one last time. The impact crater is caving in on itself, and thus ends Metroid Prime. That is of course, unless you collected 100% of all the items in the game, in which case you get an extra final cut scene. Beware of spoilers for Metroid Prime 2: Echoes in the following sentences. Metroid Prime has been reduced to a goopy puddle of what I can only assume is a mixture of Phazon and its own cellular content.As the camera zooms in on this mess a single hand, identical to Samus’ power armor but much darker reaches out from the puddle. This is of course Metroid Prime, reborn as Dark Samus and inhabiting the stolen Phazon suit.

Metroid Prime blew away its audiences with remarkable presentation and surprisingly true to its roots gameplay. This is the game that proved the GameCube was a contender, put Retro Studios on the map and that has held a place in the hearts of just about all who played it. Ask anyone which games you should start your GameCube collection with, and this is sure to be on the list. If you do not have access to a GameCube or a Wii, you can also download Metroid Prime Trilogy on the Wii U eshop for $20. It is a great deal, however, the game utilizes the control scheme from Metroid Prime 3: Corruption which makes some sections of the game easier than intended and also disables some visual effects due to the new arm canon animation. but no matter how you choose to experience it, if you haven’t already, this is a prime example of gaming done right…oh come on, I deserve points for that one.