Can I just start out by saying that Nintendo stole my idea? They stole everybody’s idea. What Pokemon fan has not, at some point in their life, been sitting around with their friends and said, “Why don’t they make a Pokemon fighting game?” followed by everyone in the room nodding in agreement that this would be a marvelous idea.

I’m honestly still perplexed at why it took Nintendo this long to cash in on this. If bored 14 year-olds had this idea, Nintendo’s marketing executives must have talked about it long before now as well. Regardless of how long it took them to pull the proverbial trigger, Pokken Tournament is here. It first arrived in Japanese arcades last summer, and it’s finally made its way into homes worldwide via the Wii U.

If you haven’t done any research on this title, or you are a Pokemon fan who is unfamiliar with fighting games, you might have a couple of questions. ‘What does Pokken mean?’ I hear you ask, and ‘Is this anything like Super Smash Bros.?’ or ‘Why is Caleb the most handsome writer at NintendoFuse?’ are all things that might be running through your head. Pokken is a pun of sorts; a combination of Pokemon and Tekken, as this game was developed by Namco Bandai, known for the Tekken and Soul Calibur games. Pokken, as I’ll call it for the remainder of the review, is in some ways similar to Smash, but only in that your directional input changes the attack.

The similarities end there, but it’s also not quite anything like Tekken, though many animations and attacks are direct references to it. The fighting system in Pokken is unique, but I’m split about rather or not that’s actually a good thing. Fights consist of two phases called “field phase” and “duel phase.” During field phase, in which all fights begin, you can move freely around the area, similar to the Naruto: Ultimate Ninja Storm series. Upon landing a strong enough hit or combo (or having one landed on you), the game shifts into duel phase.

Duel phase is just like any other fighting game you’ve ever played, from Street Fighter to Guilty Gear and in my opinion is much more enjoyable. Your combos change between the modes as well, and most of your tie in field phase will only be spent trying to gain the upper hand by being the player to initiate the phase change. The player who causes the change between either phase also gets a significant boost to their synergy gauge, this game’s version of the super meter.

The controls are simple enough, and if you’re a veteran of fighting games, you’ll feel at home with very little practice. The only thing that really bothers me is that even in duel phase, there is still a jump button as opposed to pressing up defaulting to it like any other fighter. the right bumper is for guarding while the left calls in a support Pokemon (Think Marvel vs CAPCOM assists) and, while the B button is used to jump, the remaining 3 face buttons are your attacks. The Y button is for ranged attacks, X for regular attacks and A for what the game dubs special attacks.

Each attack is different depending on rather you are airborne and which direction, if any, you are pressing when you hit the button. The combo game in Pokken is actually very deep and very fun to experiment with. You can move with either the control stick of the directional pad, but you’ll have a much easier time using the pad.  A controller that mirror’s the Japanese arcade machines’ will be releasing on April 8th, but honestly if you already own a Pro controller it isn’t necessary at all.

When it comes to Pokken’s roster, I’m really left scratching my head. Many Pokemon that seem like obvious inclusions, such as Hitmonchan or Hawlucha are nowhere to be seen, yet we have inclusions like Chandelure. Don’t get me wrong, Chandelure is actually one of my favorite Pokemon and I know that they wanted to avoid an overly fighting-type roster, but out of 16 character slots, 2 of them are Pikachu and 2 of them are Mewtwo. To their credit, Pikachu Libre is a much different character, but Shadow Mewtwo is nothing but a beefed up boss character.

On top of this, the roster is not very balanced at all. Normally a smaller roster in a fighting game means a more even playing field, but in Pokken some Pokemon are just plain overpowered or have a combo game that puts everyone else to shame. The game is desperately in need of some patches here and there, and while none has been announced, I think it would be quite foolish to pass up the opportunity to produce DLC for Pokken.

When it comes to content, Pokken feels a little lacking. It’s not as bad as Mario Tennis: Ultra Smash but you’ll clear the main story (which is laughable, by the way) in only about 3 to 4 hours and after that your only motivation to play single player is to unlock Shadow Mewtwo or to practice. The bulk on single player mode, called the Ferrum League, has you advancing through the ranks of various leagues. In each league, you have to first go through a series of battles to reach the top 8, then clear a tournament which will let you try to beat the league’s champion. The very light story is extremely predictable.

Between each league, Shadow Mewtwo shows up and you have to try to beat him, ultimately failing until you eventually win – but not until the game wants you to. Near the end they try to mix this up, but ultimately fail to make any of the narrative engaging. Speaking of the narrative, the second you boot this game, I advise you to enter the options screen and either set the voices to Japanese or turn them off entirely. My ears haven’t bled that hard since I accidentally clicked on a Nickelback video.

Speaking of sound, the music isn’t all too impressive, but there are a couple of enjoyable tracks. I eventually start to subconsciously ignore the music. This is more than made up for in the visual department, as Pokken is truly a gorgeous game. The level of detail in the fur, and scales is immaculate. 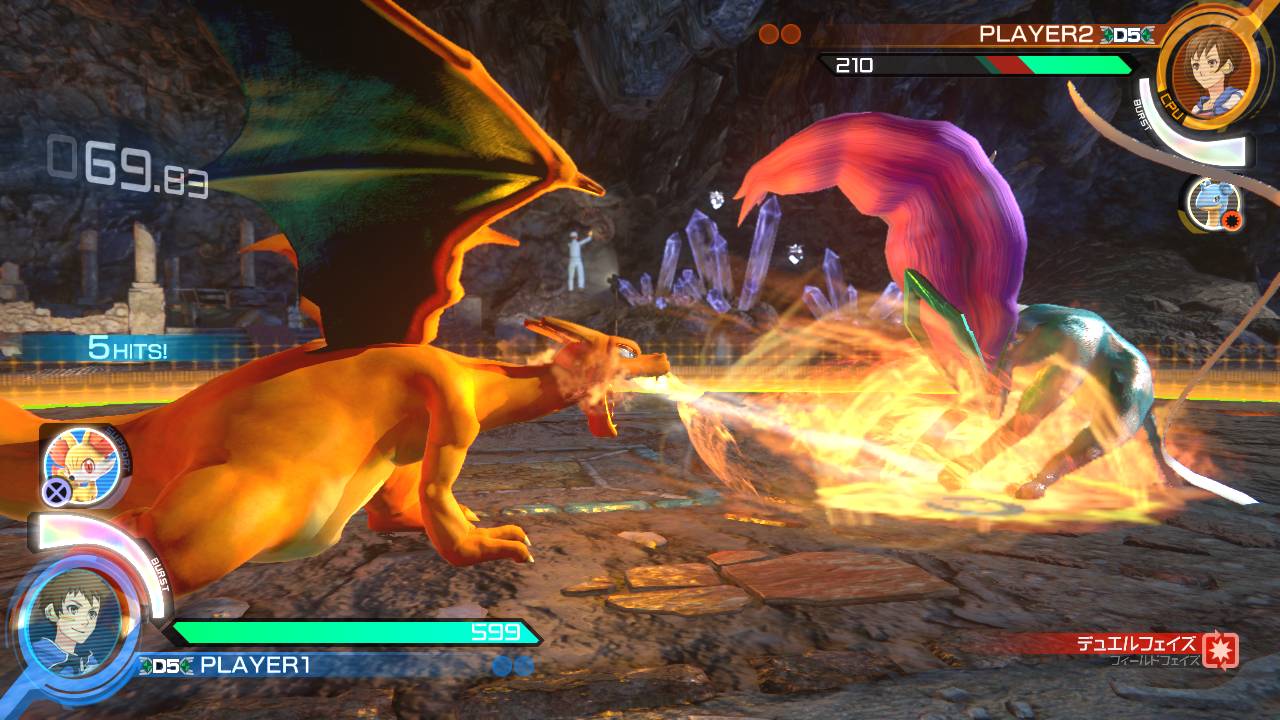 As you would expect, you can take Pokken online and it actually performs quite well. There are some latency issues here and there, but no fighting game is truly perfect online.  The thing I most hate about online play is that you cannot turn off the skill level feature. As you advance through single player, your Pokemon level up allowing you to alter their stats. This can be easily disabled for a fair match locally, but in ranked matches your stat adjustments carry over. I’m not sure why this decision was made, as the game’s including LAN mode as well as its inclusion in the upcoming EVO tournament are clear signs that Nintendo knows that many of the game’s fans are competitive gamers.

Pokken Tournament has issues in the form of balance and a lacking single player offering, but it makes up for these flaws with a fun combo system and and a legitimately interesting concept. Rather this game will stick around in the competitive setting rides almost entirely on Nintendo’s ability to keep things fresh, but regardless of what happens, I’m glad I’ll get to be a part of it, because Pokken is fun and that’s what matters.

This game is every idea I had between the ages of 10 and 15 concerning Pokemon brought to life, and even after putting in a few hours and picking a character to main (Braixen), I still get a little bit pumped every time I see the start screen. Pokken Tournament is a breath of fresh air for the Wii U.

A Second Glance
By Jeremy Hardin

Let me start by saying I really enjoyed Caleb’s review of Pokken Tournament and I know my “mini-review” won’t hold a Chandelure to his, but I’m going to give it a shot. Caleb’s review of Pokken covers everything that I would have covered, except for my personal experience with the game. So just to give you all a little background, I’ve never been a fan of Pokemon, but I have neither hated on the franchise either. I suppose you could say I’ve been indifferent. Sure, I’ve played a couple of handheld Pokemon games over the years, I even reviewed Pokemon Black and White a few years back and I really enjoyed that one. Other than those rare instances, I could have cared less. Truth be told, I requested this review copy more so my young sons could play the game as they are very much “into” Pokemon at this time in their lives. But what I found out in my time playing through Pokken Tournament is that I actually do enjoy the world of Pokemon and I really enjoyed fighting as one of these fantastical creatures (Charizard to be exact.)

I’ve never really been a fan of fighting games, so I have rather limited experience in this arena. Honestly, the last fighting game I really enjoyed was Mortal Kombat on the SNES. So going into Pokken Tournament I had no idea what to expect, other than what I saw online. As Caleb mentioned, there are two phases to a fight – field and duel. In my opinion, Duel phase is much more enjoyable than Field. Being able to engange my opponents in close quarters combat and beat the pixels out of them elicited quite the satisfied feeling. Field phase is fine, but I never spent more than a few seconds in this phase at a time. I was always working my way closer to my opponent and trying to land a powerful enough hit to shift into Duel phase. However, Field phase has its purpose in that it affords you the opportunity to be more strategic in your combat, giving you precious seconds to plan your attack as you run around the arena. Overall, I’m impressed with Phase system and I know I’ll continue to enjoy it going forward.

I always get a bit overwhelmed when learning new control schemes, especially ones that are a step above simple. I was intimidated with the controls of Pokken Tournament at first, but quickly found my footing and it all came as second nature the further I progressed. I used the Gamepad exclusively and had no issues with the controls once I get over my initial trepidation.

The visuals in Pokken Tournament are top notch for certain. The level of detail in the arenas and the Pokemon is impressive and I consider it a visual feast to consume with your eyes. Start eating! The music and sound is fine but ultimately forgettable. I didn’t have any issues when going online to play and my overall experience was smooth.

In the end, I found that Pokken Tournament was an enjoyable experience, with much to offer for both fans of Pokemon and fighting games. My recommendation is that if you haven’t played it yet, give it a try.