If you’ve been following my retrospectives here, you knew this day was coming. I have an obvious bias towards to GameCube era due to its timing and impact on my life, and to talk about the GameCube without mention of Super Smash Bros. Melee is outright heresy. Depending on who you are, it may conjure images of late night gatherings with your siblings or friends, or weekends with your college buddies, and for some even that first time you sat down on a cold steel chair at a real competition. There is no doubt that Melee is a special game. It was the Gamecube’s killer app and has outlived many other games in the competitive scene and is even still preferred over the newer entries by many. Even on a casual level, lots of people would rather play Melee than Brawl or Smash for Wii U. The answer to why is pretty clear. The physics and techniques have been perfected over the last 10 or so years. People are used to it, the game feels like home to them. If you would like more detail on that, I urge you to ask someone who plays at a high level, but I am not here today to argue about which game is better or why. I’m not here to preach the word of competitive Melee or discuss the ins and outs of the intricate physics. I’m here to revel in the best sequel ever made. 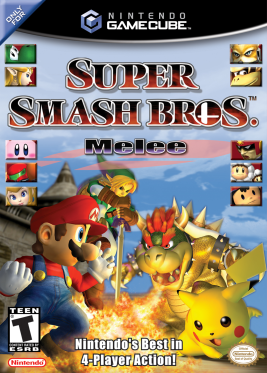 As usual, I’ll start with my personal experiences with this game. I’ve already mentioned before that I wasn’t a big Nintendo fan as a kid, with the exception of Pokemon, and I didn’t own any Nintendo consoles until the GameCube. When I was in the 6th grade, all of my friends were on the little purple lunchbox that could while I was one of the oddballs with a PlayStation 2. I was invited to come over to one of my friend’s house one summer afternoon and when I arrived, he invited over another friend and promptly turned on Super Smash Bros. Melee. I informed them that I had never played this game before but they assured me that I would get the hang of it quickly. I did pretty terribly for the first few matches but I at least understood the basic concepts and goal. The year following this, I was placed in a private school. I had asked for a GameCube for Christmas this year and one of the other students who had made the same request quickly became one of my best friends, no doubt also fueled by the fact that he lived less than a mile from me. We spent most of our spare time during lunch and recess talking about this system and what we were excited about. This friend had a Nintendo 64, and I got to play the first Super Smash Bros. on it. I struggled with this game because of its slowness, and because my friend’s joystick was also broken. I feel that being able to experience the first game for a while really put in perspective how much better Melee was. I grew up in a rural Virginia town where each year in September, we had a peanut festival. Real exciting stuff, right? This private school I’d been placed in had a float in the parade, and I was to walk on one side, passing out candy, while my aforementioned friend did the same on the other. At some point there was a small problem and the parade stopped momentarily. I shifted my weight onto one foot, not realizing it was under the floats wheel, and when things picked back up, down I went. It may seem like I’m getting totally off topic; what could getting run over by a parade float have to do with this game? To answer that question in a single word, “pity”. My family was so saddened by the fact that I was practically unable to do anything until my foot healed that they gave me the GameCube as well as Super Smash Bros. Melee 3 months in advance.

Super Smash Bros. is a fighting game, but it’s unlike any other. Instead of whittling your opponent’s health down until they are knocked out, each attack adds a certain percentage to the character’s total damage. The higher the percentage, the further they are sent flying, until eventually they are unable to recover to the stage. I like to describe the game as sort of a marriage between fighting games and platformers. Melee still has an incredibly active competitive scene to this day, but should you decide to jump in, you should be warned that it is a different world that what you probably remember. Playing the game at a high level requires vast knowledge of frame data, combos and the physics engine on which the game runs. It’s a far cry from sitting around the TV with your cousins on holidays.

This game sold over 7 million copies, which is a testament in its own right, but why? Why is this game still played at such a high level today? Why is it still preferred over the newer entries in the series? Why does it still cost the same in 2016 used and is it in 2001 from the store? Asking these questions will get you all sorts of answers based on game mechanics, but I think there’s also something else at play. As I mentioned in the beginning, Super Smash Bros. Melee is one of the greatest sequels ever made. That impact stuck with us. We went from a 12 character roster to 26, from 9 stages to 29, and from one of the ugliest Nintendo 64 games to one of the most visually impressive Gamecube titles despite it being a launch game. Melee was a faster, sleeker, 100% superior product to its predecessor. You’ll also find that the majority of competitive players are somewhere between their late twenties and their early thirties. We were the perfect age for this kind of thing to stick with. The amount of time we sank into unlocking all of this content and exploring the game itself is embedded in us. That’s why, even if you only play casually, you get that fuzzy feeling that you can’t quite blame on nostalgia alone. That’s why this game, over 15 years later, is still going strong and bringing in new people.

Normally my retrospectives are longer than this, because I delve into the story and even discuss the game in its entirety, but I can’t really do that with Melee. The game has single player modes such as classic, which functions as an arcade style mode, and adventure mode, which is much more in touch with its platformer roots than the main game, but everything pales in comparison to the multiplayer. This game was meant to play with others, and unlike a lot of multiplayer games of its day, you can easily find a good community of players in your area with some simple Facebook searches. There’s even a convention dedicated to Super Smash Bros. in Chantilly, VA in August called Super Smash Con (here’s a link if you’re interested) Super Smash Bros. Melee has a massive legacy that none of its sequels are likely to ever live up to. The newer entries have more content, and better graphics, but they don’t have the same soul.